An adventure in Endocrinology!

My 13 yr old son was diagnosed with growth hormone deficiency about 2 years ago.  Which basically means his body does not produce enough growth hormones to tell his body to grow.


Since my 2nd son was about 6 months old, my husband and I both noticed that he was not growing at the same rate as our first born son.  At first we just thought he was just growing differently, most kids do!  As he got older and started school, we began noticing that he was a lot smaller than his peers.  I started asking the pediatrician about it at his check ups.  Which they would always reply, he is just small.  He was always below the growth chart for his age.  After several attempts at questioning the doctors, one finally did a bone growth x-ray on him when he was 7.  Results were nonchalantly reported to me, he has the bone growth of a 3 yr old, but he has plenty of room and he is fine.  So, since I was not a doctor myself, I took what they told me as the truth.

Then when he was about 9 or 10, we had to change pediatricians because of his insurance.  We had to call a number and wait forever to try and get a spot with a doctor.  The only pediatrician in the surrounding area was one that I had never heard of.  I was skeptical, but I didn't have a choice.  God knows what He is doing.  We went for a "get to know you" visit, and about 15 minutes into the appointment, he asked, has anyone ever said anything to you about his size?  Of course I perked up!  I told him all that we had been through with the previous clinic. When I told him about the bone growth x-ray they did to shut me up, he questioned me several times as to whether or not they did follow up blood tests. (which they didn't)  The Dr. just couldn't believe that they did not follow up.  So we had another bone growth x-ray and blood drawn the next day.  The Dr. called me 2 days later and said that he had gotten the x-ray results and they were abnormal.  He said he had not gotten any of the blood work back, but he suspected it to come back abnormal as well, and referred us to the Endocrinology dept at the Arkansas Children's Hospital in Little Rock.  Within a month we were on our first trip there.  Its about a 2 1/2 to 3 hour drive one way, but we were happy to do it!  After several appointments 6 months apart to monitor his growth, they decided that he just was not growing.  The Dr. told us that they will accept no less than 2 inches per year for normal growth. My son had not grown more than a half inch in almost 2 years.  They scheduled the blood tests for him.  He couldn't eat anything after midnight, so we tried to get an early appointment.  We left our home about 4:30 in the morning!  The tests were not horrible, but they were not fun.  First they had to put an I.V. in, and then they gave him some medicine and drew blood every 15 minutes.  Thank heaven for the personal DVD player! 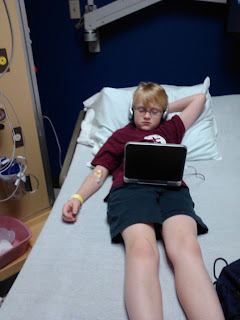 But the 2nd round they gave him insulin and took his blood every 30 mins.  But that made him sick to his stomach.  Poor guy looked so sad, dry heaving into a little bowl, pale as can be. 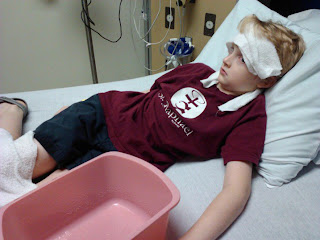 Once the test was done we headed home, by way of his favorite burger place.  He barely ate, but he got enough in him to calm his stomach. 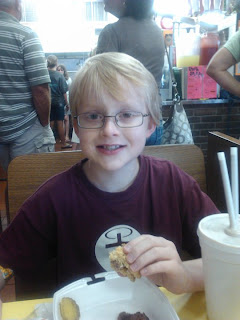 He slept the rest of the way home. 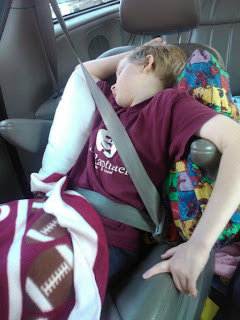 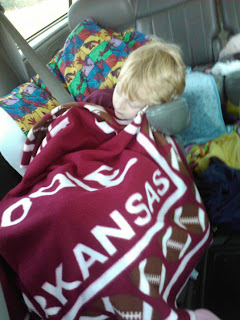 Several weeks later, I got a call.  It was the nurse from the Endo clinic.  She told me that she had my sons results.  She told me several times that anything 10.1 and above was considered normal and 10.0 and below was abnormal.  I was thinking great, he is probably 10.5 or something.  She said every one of his tests came back at 1.7.  1.7!!  No wonder he was not growing!
After a CAT scan to make sure there were no tumors on his pituitary gland causing the lack of hormone production, we started our first round of Norditropin.  A nurse came to our house to show me and my son how to give him the shots.

I am so thankful that we didn't have a choice picking a pediatrician all those years ago!  God knows where He is sending us!

Here is what we did on our last trip to Little Rock.

Here we are on Junction Bridge over the Arkansas River. 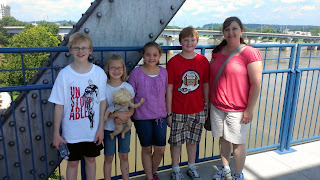 This is what it looks like.  It was crazy high up!! 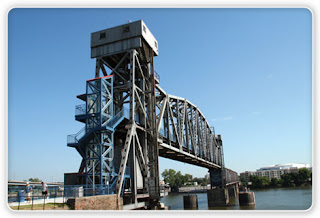 We had lunch at Riverfront Park. 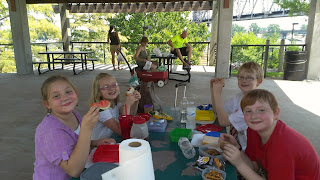 Climbed on the spider web... 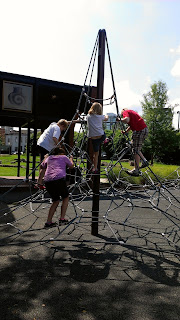 Checked out the History Pavilion 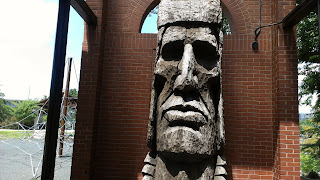 History Pavilion
The city skyline, visible from the park makes it difficult to imagine the area as it appeared to early explorers. Today we can only envision it through their drawings and maps, their descriptions of geographic characteristics and the natural landmarks they noted. The History Pavilion takes you on a trip back in time. Read about the history of Little Rock, and the state of Arkansas, in this great exhibit.
The History Pavilion is also home to an Indian Head statue which was carved by Peter Toth in 1975. This statue was one of approximately sixty Native American likenesses that he carved in all 50 states. The statue represents a tribute to Native Americans.


Stood like the statue...I can't remember who this guy is... 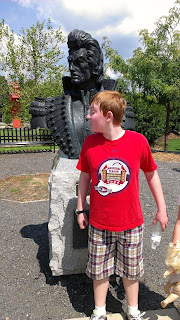 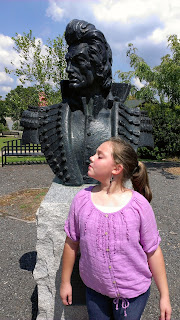 Do you see the photo bomber?? 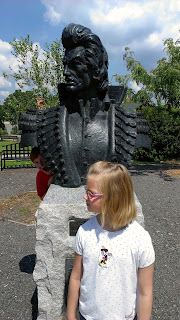 After we walked through the farmers market, the kids decided to cool off at the water park

It made for a very wet ride home... 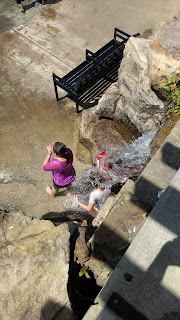 Next time we will be more prepared!  We didn't know that there would be a free water park for us to enjoy!
Good thing the kids brought blankets in the van!

Here is N drying his hair on the Interstate!
(yes he does have a seat belt on, although you can't see it in this picture!)

We are looking forward to our next trip to Little Rock, we may even visit the Capitol building!
Only 4 months away! :-) 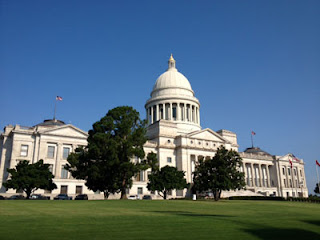